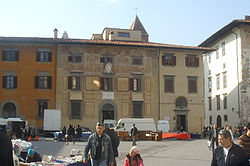 The Palace is a building of the College Puteano Piazza dei Cavalieri in Pisa.

The building, adjacent to the church of San Rocco was built in its present form between 1594 and 1598 by joining a group of older houses.

In 1605 he was in perpetual lease granted to the Knights of Santo Stefano, Piedmont to house students of the University of Pisa, according to a wish of Archbishop Carlo Antonio Dal Pozzo (from which comes the name of Puteano).

The facade was decorated with allegorical frescoes between 1608 and 1609 by John Stephen Marucelli. After the suppression of the Order, the college remained open until 1925, but already in 1930 the Scuola Normale di Pisa did reopen as the student’s home of the prestigious University which had its headquarters on the nearby Palazzo dei Cavalieri, a position he still holds today.