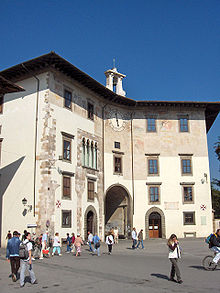 The Building of the clock is one of the buildings facing on Piazza dei Cavalieri in Pisa.

It is an ancient medieval building where he lived since at least the captain of the People 1357, which belonged to the family Gualandi. When the building was constructed also incorporated the famous Tower of Muda Of Fame, or where he died in 1289, Count Ugolino della Gherardesca with their children and grandchildren, the protagonist of one of the most famous pages of Dante’s Divine Comedy (Inferno, XXXIII). The profile of the tower are still visible on the left of the central arch, which opens today, the four-twentieth century.

In 1605-1608, following the connection of two neighboring buildings through an arc with the clock, the building was finished in its present form, as designed by Giorgio Vasari in 1554, by 1566 already housed the infirmary of the Order Knights of Santo Stefano Bonomo said he was responsible for health, so the building is also known as the Palace of Bonomo.

Between 1607 and 1609 Giovanni Stefano and Filippo Paladini Marucelli frescoed facade and the inner vault of the arch with outfits, grotesque and allegorical figures, which imply the celebration and the Order of the House of Medici. The clock and bell tower date back to 1696.

In 1919, after the Order had now been removed, the building was purchased by Count Albert Gherardesca, which promoted a controversial renovation in the neo-Gothic style, with the opening of a four on the front.

In the seventies and eighties, the building became the Scuola Normale of Pisa, who used it as a library, at that time was also created an underground passage that connects it to the Knights’ Palace, home of the school.