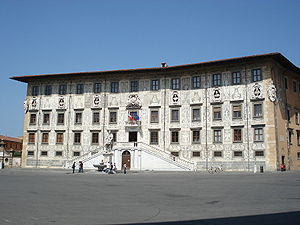 Caravan or Palace of the Knights – Pisa

The palace of the Caravan (or Knights) is one of the most famous buildings in Pisa and the most prominent of Piazza dei Cavalieri in Pisa. Even the headquarters of the Order of the Knights of St. Stephen, the 1846 is the Scuola Normale di Pisa.

It was built between 1562 and 1564 by Giorgio Vasari, dramatically restructuring the medieval Palace of the Elders: Some remains of the palace and towers of some houses, however, are still visible along the sides of the building.

The name comes from three years in the novitiate of the new recruits, during which they followed a course of training in the use of weapons to be part of the "caravans" that would have beaten the Mediterranean and resisted the raids of pirates, hence the term precisely the caravan.

Vasari regularized the uneven medieval facade, combining architecture, sculpture and painting. Graffiti with allegorical figures and zodiacal signs, designed by Vasari himself, were in fact carried out by Thomas and Alexander Forzore Baptist del Verrocchio (1564-1566), animate the elevations along with marble busts and coats. The paintings of today seem to enjoy an excellent state of preservation, but in reality they are due to be repainted in the nineteenth and twentieth centuries, as the paint on exterior extremely fragile and subject to fading and detachment because of the weather.

Among the sculptures are reminiscent of the Medici coat of arms and knights, supported dail allegories of Religion and Justice Stoldo Lorenzi (1563), the corners are the emblems of John Fancelli (1564). Above a gallery of busts of the Medici Grand Dukes were added at three different times by many hands: Cosimo I, Francesco I and Ferdinand I by Ridolfo Sirigatti in 1590-1596; Cosimo II by Pietro Tacca (1633 approximately), Ferdinand II and Cosimo III by Giovan Battista Foggini (1681 and 1718).

The marble staircase with two flights was rebuilt in 1821 by Joseph Marchelli to replace the original smaller size. The rear building was added to a design by John Girometti in 1928-1930 on the occasion of a revival of the Normal School promoted by Giovanni Gentile.

Inside there is still some rooms painted or decorated with stucco work of the nineteenth century, where some paintings by the sixteenth century (Charles Portelli, Francesco del Brina and Giovan Battista Naldini).