Church of San Sisto in Cortevecchia 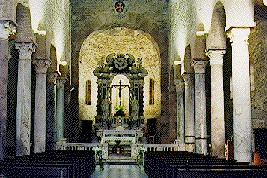 Church of San Sisto in Cortevecchia

We celebrated every August 6 "The day of San Sisto," Pisan memorable date. The church is near Piazza dei Cavalieri.
It is one of the oldest churches in Pisa: its construction goes back to 1070, seven years after the founding of the cathedral, although other sources indicate 1132 as year of the consecration of the Archbishop Uberto Lanfranchi. In some documents show that the building was used from 1094 as a place of rogation of the acts of the Municipality of Pisa, under whose auspices the church was erected and remained until modern times.

The church was dedicated to St. Sixtus because in the days of August 6, dedicated to the saint, the Pisani reported repeatedly reported victories: Reggio Calabria in 1006, Palermo in 1063 and against the Genoese in 1072. But the date did not bring them luck in Pisa: 6 August 1284 disaster struck the ship Meloria. From 1562 to 1565 was the seat of the Knights of St. Stephen, waiting for the new church.

The religious building is built of stone, has an architectural style with three naves and Pisan Romanesque granite columns, with capitals of the classical re-used. The facade is decorated with blind arches and ceramic basins.