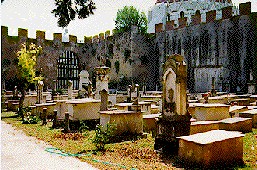 The cemetery is located behind the Piazza dei Miracoli, the side baptistery. Opening hours: Sunday 9.30-12.30, 16.30-dusk Wednesday to offer input.
The Jewish cemetery of Pisa, located on various levels of land, is included in the monumental complex of Piazza dei Miracoli, dates back to 1648 and is one of the oldest Jewish cemeteries in Europe: there are memories preserved ancient tombs of significant historical and artistic value, with not only written in Hebrew and Italian but also Spanish and Portuguese of the seventeenth and eighteenth centuries, French, German and Czech. There are famous people buried in the politics and culture. From the artistic side of the cemetery has an extraordinary repertoire ranging from traditional Iberian barrows parallelepiped, the seventeenth and eighteenth centuries, the monuments of the early nineteenth century Empire style, from Gothic tabernacles of the nineteenth century, Art Nouveau styles of the late King Umberto and the nineteenth century and the early twentieth century.