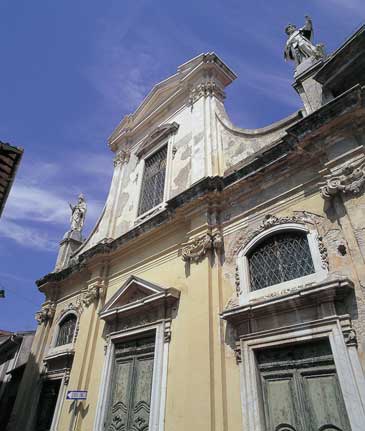 The church, founded in the twelfth-century
was granted to the Benedictine monks in 1118 and later, in 1331, the Dominican nuns. Completely rebuilt in the seventeenth century, the Romanesque style retains only the semicircular apse and the bell down on the back, with the bottom stone and the upper brick. The facade is in Baroque style in 1771 with three doors and two statues at the corners representing St. Sylvester and St. Dominic. The interior is divided into three naves with eighteenth-century decoration, although the frescoes on the walls are damaged and the ceiling has been stripped of the paintings of Lomi. The adjoining monastery with a Renaissance facade, also rebuilt in the seventeenth century, was suppressed by the French in 1810 and converted into a boarding school for students; remained so even today as the site of a conservation laboratory, except for a period in which was used as a reformatory.