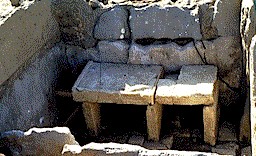 Of particular interest are the findings of the Etruscan necropolis of Casa Nocera, with tombs of the seventh and sixth centuries BC, whose rich grave goods are synonymous with a rich and powerful ruling class.
Very famous is the tomb tholos dating from the fifth century BC, found by chance in 1896 in the village Poggiarella: it is a circular tomb with a diameter of 3.30 meters dromos (corridor) and Tholos (false dome) covered by a mound of earth .
In 1937 at La Pieve and Poggio were found the remains of two ancient Roman villas that testify the passage from the Etruscan period to the Roman period. According to popular belief there were two castles in the area, New Casale Casale Vecchio and, although no archaeological discovery leads to substantiate this belief.