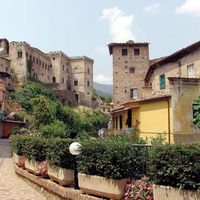 Probably of Roman origin, the town of Buti is located on the eastern slopes of the Monti Pisani, on the shores of the Great River, through forests of pine and chestnut trees. The municipality comprises the towns of Buti, The Cross and the Cascine, linked from the main road that runs along the Rio Magno.

In addition to the Villa Medici, places of artistic interest are Castel Tonini, overlooking the town, the Romanesque church of San Francesco and the Church of the Ascension, also known as St. Mary of the Snows. The latter is reached by going from Buti along the "Via dei Molini", the road leading to Monte Serra, so called because it was once the way of the water mills.
Walking through the village you can visit the Teatro Francesco di Bartolo (first commentator of the Divine Comedy), a small structure built in 1842 according to the architectural academic theaters beginning of ‘800.
The geographical location of the town, almost completely surrounded by the Monti Pisani, has greatly influenced the local economy. Once a farming hamlet, essentially, Buti based its activities on the production of olive oil, chestnuts and the collection of the woodwork.
Since the nineteenth century was to increase the production of handmade baskets, crates and baskets, while in the twentieth century and developed an activity linked to the furniture industry. Even today, trade and agriculture are important resources to the project thanks to the accession of the Road of the Pisan hills and the availability of two modern mills that are used by several municipalities in the province.
The rich associational life, numerous recreational facilities, the ongoing local events (remember the Palio of San Antonio

in January) and a major theater season Buti make a country attractive and stimulating place to visit and to live, thanks to the richness of its forests, which make possible the many pleasant walking and cycling.