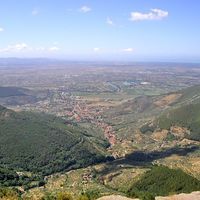 Kicks is a few kilometers from Pisa, at the foot of Monti Pisani and the center of Valgraziosa. The valley, which looks like an amphitheater, collects the villages on its slopes, which together constitute Kicks.

Today Kicks is a farming town gathered around the Parish Church of SS. John and Ermolao, surrounded by terraced olive groves in the lower part is dominated by the Monte Serra at the top, covered with pine and chestnut. From the top, on clear days, you can admire beautiful landscapes ranging from the city of Pisa Tuscan Archipelago.

Due to its strategic location and the presence of the nearby fortress of Verruca Kicks has always been involved in the bloody medieval wars between Pisa and Florence. Since the sixteenth century, however, the country began to develop around the course of the stream, where until the last century over a hundred mills operated by water wheels driven. The favorable climate all year for walks through interesting places in terms of natural, environmental, historical and artistic.

Kicks has two sites of tourist importance: the monumental Charterhouse and the Museum of Natural History and Territory, University of Pisa.

Founded in the fifteenth century, thanks to the legacy of an Armenian merchant, the Certosa di Pisa is a monumental Baroque style consists of a large courtyard dedicated to the life and the common point of contact with the outside world and a series of buildings that surround it in which the cells are obtained, the gardens and private environments, suitable for the rule of the Carthusian life. Among these, the apartment of the prior, the library, the historical and pharmacy. Inhabited by the Carthusian monks until the seventies, the Charterhouse is now open to visitors.

A wing of the complex houses the Museum of Natural History and Territory, University of Pisa, which includes paleontological, mineralogical and zoological, as well as hosting a gallery of cetaceans among the largest in Europe and new rooms devoted to dinosaurs.