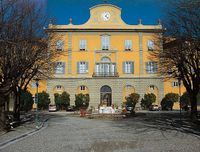 The name of San Giuliano Terme is inextricably linked to the spa and its mineral waters, whose healing properties were already known to the Romans. The period of splendor of the spa, however, was the nineteenth century, when the "Bagni di Pisa" would meet the European nobility and important personalities in the literary world as Montaigne, Alfieri, Byron and Shelley.

Today the water of San Giuliano is ideal for combating diseases of the respiratory system and strengthen the immune system. The renovated health club and spa of Bagni di Pisa – San Giuliano Terme offers various programs and customized treatments

The municipality of San Giuliano Terme encompasses a large area rich in artistic, historical and natural, bordered by the rivers Arno and Serchio and extended from the slopes of the Pisan hills to Migliarino San Rossore. Have been recently established two protected areas of local interest (ANPIL): Valley of the Springs area, who wants to protect the sources and the ‘Medici aqueduct (XIV century), and the area’s scenic Mount Castle, which contains about forty species of orchids . The appearance of the Monti Pisani was much modified over the centuries, passing from the original forest of chestnut and fruit trees to the terraces for the production of quality olive oil, so that from here passes the Road of the same name .

San Giuliano Terme – Ripafratta, Cassero The San Giuliano Terme is also the starting point for tours of great historical and architectural interest: the Rock of Ripafratta, for centuries the scene of conflict between Pisa and Lucca, the Romanesque churches of Rigoli (VIII) and Pugnano (XI), the Hermitage of Rupecava.

The strong point of the territory are also many villas and historic houses built between the fifteenth and the nineteenth-century Pisan and Florentine families attracted by the nature and mild climate. Some of these have been restored and turned into tourist facilities or for ceremonies and conferences.

September is the ideal month for events: the September Sangiulianese offers a full calendar of shows and entertainment for all tastes, both in the capital than in fractions.