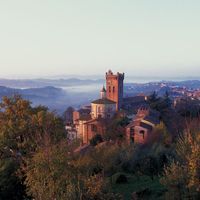 Of Lombard (eighth century), situated on the Via Francigena, San Miniato assumed a leading role under the Emperor Frederick Barbarossa said, becoming the first seat of imperial vicar in Tuscany (in the Middle Ages the city was called San Miniato fact the German ), then a bishopric. Date from this period the construction of the Seminary, with its characteristic facade with frescoes, and the remodeling of the Bishop’s Palace, both near the Cathedral.
San Miniato is a city of emperors and bishops: Frederick II even after Napoleon was in San Miniato, where there was a branch of the Bonaparte family. The events of World War II, unfortunately, have destroyed part of the medieval buildings (including the Rocca of Federico, then rebuilt); particularly painful episode of the Nazi massacre in the Cathedral, which have drawn the Taviani brothers for the film The Night San Lorenzo.
The old town of San Miniato Museum offers an interesting system that connects with a single ticket eight exhibition centers, museums, historic buildings and collections. At San Miniato Basso is however a Museum of Scripture, designed especially for children and students, which covers the most important stages of the writing of history from the Stone Age to the present day.
San Miniato offers an intense cultural activity throughout the year: the International Festival of Puppetry The moon is blue (late June) at the Theatre Festival (July), the summer festival of classical music concerts in castles of sound.

The highlight of the calendar San Miniato, however, the traditional National White Truffle Market Fair, which takes place in the main streets and piazzas of the old second, third and fourth weekends of November. The trade show is preceded by other parties related to the precious tuber to nearby countries, begins in March with Cigoli (birthplace of the painter Ludovico Cardi, called "The Cigoli") and continues with Balconevisi and Armor, where there is a Romanesque church twelfth century and the Teatro Comunale in Quaranthana.
The wrinkled tomatoes, artichoke, the mallegato, olive mignola are just some of the typical products that have helped make the City of San Miniato, and Tastes of Slow Food. Here was born the "market", the market for agricultural produce zero kilometer, to encourage consumption of local products.

San Miniato is one of the towns of the Leather District, with industries located mainly in the village of Ponte a Egola.