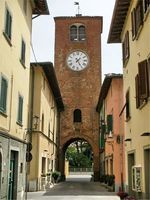 Castelfranco di Sotto, located in the foothills of Cerbaie, is one of the towns of the leather, the area where you produce shoes and leather and leather goods are exported all over the world.

If you have lost much of its medieval structure, Castelfranco has retained the urban layout of the Roman period, with two main roads that intersect at right angles to the four doors leading through the Bell Tower, the only remains of medieval times. Among the points of interest are reminiscent of the Town Hall, formerly the Palace of the Chancellery, the Collegiate Church of SS Peter and Paul (1284) and the Conservatory of the Sisters of St. Matthew (XVII).

The archaeological exhibitions of Castelfranco and Orentano illustrate the stages of human settlement in the territory from prehistory to the Renaissance. If the first describes the birth of Castrum Franchum with murals and plaster casts, the second presents educational panels and plastic prehistory, Etruscan and Roman period.

Orentano is known as the land of pastry chefs, a tradition that dates back to when the inhabitants were forced to emigrate in search of work in Italian cities, working in fine restaurants and bakeries. Here is held the Festival of puffs from 1968: the end of August confectioners achieve record-breaking sculptures made ​​of sugar, butter, eggs and flour.
Among the events will signal the full calendar of events Castelfranchesi Summer (June-July) and above, the third Sunday in May, the original Palio of small boats with wheels, competing strongly felt by the four historic districts that compete for roads "with his oars."
Around the capital, inside the Natural Reserve of Montefalcone, hills and forests are crossed by a network of trails for walking the CAI and cycling. The area is characterized by an alternation of ridges, Vallin and wetlands. Within the perimeter of the reserve at Staffoli, is an area equipped for the public.