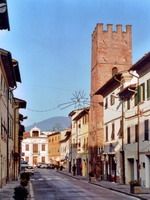 At the heart of the fertile plain of the Arno Valley Pisa is Calcutta, a lively and busy town, full of industries and handicrafts.

The name refers to the traditional craft of pottery and numerous lime kilns active until the sixties, when the vocation took on commercial and industrial predominance, especially in Fornacette, where you were born and production services.

Calcutta has a strong economy now mostly industrial, made of small and medium enterprises in the engineering industry, textile, apparel and services, supported by a network of qualified business.

The district is a critical step in the viability of the province of Pisa, as well as ancient times was an important node for the traffic control river Arno.
In May, in honor of the patron Saint Ubaldesca Taccini, there is the Historical Regatta on the River Arno, with the participation of the three districts of the country. The competition commemorates the ancient activity of navicellai, that Calcutta carrying sand, bricks and timber barges ("fleet") to the port of Livorno.
The great bend of the Arno is one of the most important fields of competition for national and international sport fishing. Nearby, on the banks of an artificial lake, Greenland is the playground, ideal for children and families.