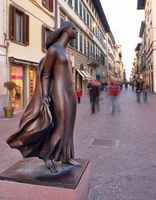 The name is linked to the Pontedera Piaggio since 1924, when the engineer from Genoa Rinaldo Piaggio I moved part of its aerospace industry, which after the Second World War it was converted into a factory of motorcycles participating in the economic boom of the sixties and transforming the face of the city.

Pontedera is now the Museum of the Piaggio Foundation "Giovanni Alberto Agnelli", which exposes the many models produced by over a vast historical archive. In an old warehouse is home to the Polo Sant’Anna Valdera center of excellence in robotics and information technology.

Pontedera has recently become a center of contemporary art thanks to the Exhibition Centre Otello Cirri, the spaces of the Municipal Library, and permanent sculptures located in the parks and squares of the city (see the benches copyright in Piazza Garibaldi), or center of roundabouts. In this open-air museum is the original signal the Wall Baj, oleander by Carmassi, Taurus Cascella, Trafeli of the Vespa, the young woman and works of Vangi Canuti.

Even the theatrical activity is a strong point of the city: the new theater was home to the Pontedera Theatre Foundation, also known abroad for his avant-garde productions. There are many cultural events, theatrical and musical events throughout the year, both in town and nearby villages and Montecastello Treggiaia.

Because of its location between the nodal point Valdera Valdarno, Valdinievole and Pontedera plain of Lucca has always been a very busy shopping center. Even today, in the month of October, we celebrate the Feast of Saint Luke, the sample Valdera and Valdarno whose first edition was published in 1471. The wide range of commercial shopping center is enriched by a weekly market every Friday of the largest in Tuscany. To celebrate the commercial vocation of the city every summer, the municipal government organized a series of evenings devoted to shopping under the stars, culminating in the Feast of Commerce and the Notte Bianca.