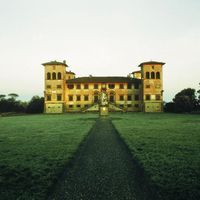 Of strategic importance since at the border between the republics of Pisa and Florence, was the scene of frequent clashes Ponsacco. In this period the birth of the old town, once surrounded by ramparts and walls, then destroyed by the Florentines.
Ponsacco is known as City Furniture and Furnishing: The Second World War saw the development of many small craft businesses dedicated to the production of furniture and home furnishings, a tradition that continues today. On the initiative of the furniture of Ponsacco in 1947 was inaugurated the Permanent Exhibition of Furniture, whose seven-story house now stands over a hundred rooms, kitchens, living rooms, living rooms and furnishings.

On the first floor you can visit the Museum of Wood, where he relives the old carpenter’s shop with the tools used to build furniture.
Ponsacco not retain special artistic attractions, except for the ‘Oratory of Our Lady of the Cough, with fourteenth-century pottery attributed to Luca della Robbia, and the Church of San Giovanni with the baptismal font.

Nearby you report the feudal village of Camugliano with Villa Niccolini, as Villa Medici, in the middle of a private estate.

The territory is mostly flat and urbanized. The only green area than the Estate of Camugliano is the area of ​​Poggini equipped, ideal for a stroll on foot or by bicycle.