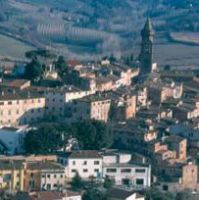 Peccioli stands on the hills with its distinctive bell tower of the Parish of St. Verano (XI), the architect Bellincioni with valuable works in the Pisan school. The nearby Praetorian Palace, whose facade stand out on the arms of the mayor, houses the Museum of Russian Icons, which is dedicated to the journalist Francesco Bigazzi, Moscow correspondent, who gave the Peccioli his collection of icons of the nineteenth and early twentieth century. Nearby is the International School and Laboratory of icons, which organizes seminars, restoration and painting in collaboration with the State Russian Museum in St. Petersburg.

Peccioli center also houses a museum run by the Foundation for Art Peccioli including the Archaeological Museum (with the recent finds of Etruscan Sanctuary Ortaglia), the Museum Collection Etchings and Lithographs, the Bell Tower and the Museum of Sacred Art, forthcoming opening.

Peccioli not surprising only for its cultural offerings, but also to the theater. The company "Peccioli Theatre" shows produced by Italian and foreign source Mazzola Amphitheatre, nestled between the hills and built in harmony with the surrounding landscape. Among the events will signal the summer festival "in Peccioli Eleven Moons" and winter "Fiabesque", dedicated to the world of the fairy tale. For children a Prehistoric Park with reconstructions of dinosaurs and other prehistoric animals in fiberglass.

Nearby, the beautiful hilly landscapes characterized by vineyards and olive groves are scattered many hamlets, among which are the former castle and ancient church of Factory, with its astronomical observatory Libbiano destination for fans and Legoli, which has in the Chapel of Santa Catherine is a tabernacle of Benozzo Gozzoli. Peccioli was awarded by the Italian Touring Club with the orange flag, a trademark of the territory and tourist services.