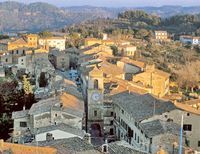 Palaia is an agricultural town situated on one of the highest ridges that divide the valley of the Arno from the Era.

Of Etruscan origin, as evidenced by some findings, Palaia has experienced a period of relative prosperity in the thirteenth century, when they built the church of San Martino, the original brick building where they held an annual international festival of choirs, and the Church of Sant ‘Andrea, which preserves valuable works of art.

The memory of its agricultural traditions can be found in the vicinity: the village of Montefoscoli today houses the Museum of Country Life, where we visit the cellars, mill and coppaio. Work at the Museum of Civilization and the Rural San Gervasio are exposed equipment, tools and even antique tractors.

Palaia is a starting point for excursions of great scenic beauty, as the road through the villages of Colleoli (old castle now a hotel), Villa Saletta (where movies were filmed The Night of San Lorenzo and the Taviani brothers and Fiorile Napoleon and Me by Paolo Virzi) and Toiano, a village inhabited by gentle hills and steep gullies of sand.

Among the events will signal the Medieval Festival (Palaia, third Sunday of September) and the People’s Theatre Festival (Villa Saletta, the end of June). If you are looking for curiosity, is held in July in Forcoli the original beauty contest "Miss Fatty", which sees women from all over the catwalk Italy provided more than 100 kg.

Palaia is also collecting area of ​​the white truffle. Not surprisingly, has recently established the River Park of the nose, first in Italy, where they are protected vegetation and water courses that encourage the reproduction of the precious tuber.