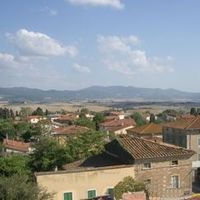 Situated on a gentle hillside, is at the center of an area that offers a rich natural heritage and food and wine. The paths and roads white to those who allow them to duck out along the hectic city life, walking or cycling in the wild fields and hills.

The origins of Orciano, already documented in the eighth century medieval castle, remains uncertain. The most widely accepted opinion has it that it has arisen as a fee payable to a family of Lombard origin.

It is easy to assume that Orciano has followed the fate of the other villages of the Pisan Hills, Florence fell under the domination with the defeat of Pisa and then adapt to the grand ducal regime. On 14 August 1846 the country was devastated by an earthquake that affected the whole area of ​​the Pisan Hills.

To visit the Church of San Michele quattrocentensca, within which is a copy of the canvas hagiography of St. Michael the Archangel Raphael.