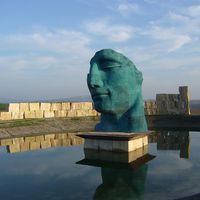 Of Lombard, Lajatico castle of the counts was then the bishop of Volterra Pannocchieschi before being conquered by Pisa and then Florence.
Lajatico has become an international tourist destination as the birthplace of the famous tenor Andrea Bocelli. Each year in July, in the evocative setting of the Theatre of Silence, it plays a concert in which it participates Bocelli himself with artists of international standing. The theater, founded in 2006 to host one show a year (hence the name), is a natural amphitheater that uses the shape of a hill just outside of the country.
Another symbol of the area is the imposing fortress of Pietracassia, built in the Lombard era to guard the road leading to the copper mines of Montecatini. Abandoned for centuries, is considered one of the most important examples of architecture of medieval Tuscany. The name is due to a crack which is open on a huge limestone rock that rises from the ridge ("cash" means split).
Nearby, the Mofette Borboi is an area with geothermal phenomena arising from the issue of carbon dioxide from the underground and the subject of research conducted by the National Research Council in conjunction with international universities. After you come to Orciatico, whose recently restored historic core retains a fortress from whose tower offers a splendid view of Monti Pisani and Era. Orciatico is famous for chestnuts and the presence of two windmills built at the end of the seventeenth and still in good condition. The water mills in the area had in fact a reduced potential for low flow of streams, especially in summer.