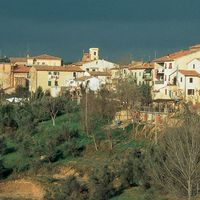 Fauglia has retained the characteristics of a typical rural village, a witness to a farming all but disappeared. Following the destruction of the castle, which took place in 1433 by the Florentines, the town was gradually structuring itself as we see it today, along the crest of the hill.
On the only road that crosses the town overlooking buildings and palaces built mostly between the XVII and XIX century, in the moment of greatest prosperity of the area. Points of interest include the Church of San Lorenzo, the town hall and the old church tower. To visit the underground storage of grain, recently found in Market Square.
The surrounding area offers some of the most breathtaking panoramic views of the Pisan Hills. The terrain is hilly, but there are flat areas like those around the villages of Valtra, known for furniture, and Acciaiolo. In the past most of the inhabitants were engaged in agriculture, today, while continuing the production of DOC wines, the main activities are trade and service sectors in general.
Fauglia is known for its villas, where they stayed nobles, scholars and artists. Villa Being Among these stands out, belonged to the actress Marta Abba, who named it in memory of a play by Pirandello dedicated to her.
A Fauglia There are two museums related to the activity of two well-known artists: Alvaro Marioni, painter and engraver, and Giorgio Kiernek, post-Macchiaioli painter who with his paintings have immortalized the surrounding countryside.