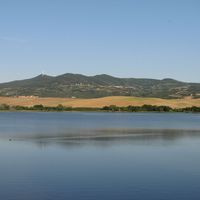 Documented since the ninth century, Holy Light now only retains some traces of the fortress and medieval urban structure, as well as a Romanesque church in the nearby village of Santa Luce Parish almost destroyed by the earthquake that struck the area in 1846 of the Pisan Hills.
They are, however, the nature and the environment to characterize the municipality. The Holy Light woods are crisscrossed by trails and hiking paths and cycling. The oasis LIPU of the artificial lake of Santa Luce has a visitor center and teaching laboratory, equipped nature trails and locations for bird watchers.
The local economy is mainly based on agriculture: olive oil, wine, honey and cereals are the main products of local farms. In another sign of old crafts you can visit a section of ‘eco-museum of alabaster, which also includes the towns of Volterra and Castellina Marittima.
A Pomaia center is located among the most important Buddhist culture of Europe: the ‘Istituto Lama Tsongkhapa. Founded in 1977, is housed in a building with meditation halls, dining rooms, library and guest rooms. Around the main building there is the villa of the blade, and some residents used wooden cottages for meditation retreats. Given the presence of two resident lamas, the institute is home to teachers and mediators, as well as famous artists and actors of the Buddhist faith.