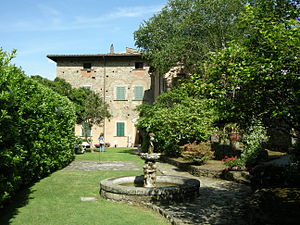 Buti rises on the ruins of an ancient fortress of the eleventh century, the Villa Medici, built during the sixteenth century by the illustrious Medici family of Florence and place of residence during the hunting seasons.
The Villa was the center of a small city, villa, church, stables, gardens and orchards with fruit. The typology of the villa during the eighteenth century was linked to an architecture that connected to a residence for the control of agricultural production.
One of the owners after the Medici Tonini was Peter who held an important position in the administrative of the Grand Duchy of Tuscany. With the passage of property from the Banti Tonini around 1760, the House changed its appearance since she was entrusted with the task of representing the economic and social prestige of the new owner, thus becoming Villa Delight. The villa was enriched by an extraordinary interior decoration work by the Florentine painter Pietro Giarre (who also decorated the Certosa di Calci).
The villa is on three floors high and a cellar.
The cellar is divided into three rooms, a trapezoid defined by cross vaults, the other two at a time, the ground floor and first floor (main floor) have the same pattern: a large central hall that leads to other rooms extensively painted. The attic, used for drying of grains and fruits, is divided by three arches, enlightened, to the north and south, by openings.
There is a natural cave, no longer accessible, but already documented in 1619, this was a secret passage connected to the escape of important people to the city of Pisa.
Important is the role of the garden that grows in the sequence of three terraces in a hierarchy of distribution: the part of the Renaissance (flower park) communicates with the floor, the ground floor with the camellias and hard with the fruit cellar.
The typological conformation is therefore a cross between a medieval structure of the walls, and the Renaissance, Baroque elements in the flower beds, ponds and statues.