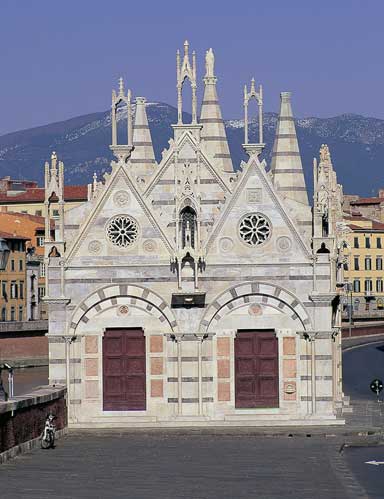 Santa Maria della Spina is a small Gothic church in Pisa mail. The temple, built in 1230 by the Gualandi family, was originally called St. Mary of Pontenovo, because the bridge linking San Antonio on via Santa Maria, then collapsed in the fifteenth century. Plug the name derives from the fact that he kept a plug that would be part of the crown worn by Jesus at his crucifixion and brought here in 1333, but kept the nineteenth century in the church of Santa Chiara. Originally the church was to consist of a single balcony and covered with a gable roof. In 1322 the City decided to expand the work begun in 1323 and finished in 1376, probably under the direction of Francis and the Wolf of his size, which succeeded that of Andrea and Nino Pisano. The church was subject to many restorations due to land subsidence and the proximity of the Arno river on whose banks it was built. Finally, after the unification of Italy, a commission formed by members of the Academy of Fine Arts decided the dismantling and reconstruction which was more stable and secure. The work, led by the architect Vincenzo Micheli, began in 1871 and ended in 1875. This action moved a few meters to the east, and higher up the temple. However, there were substantial changes to the original structure: some steps were included, the statues were badly restored or replaced, and the sacristy of 1613 was never rebuilt. A special feature is that the church of Santa Maria della Spina has always been administered by the City, except for some brackets in the seventeenth and eighteenth century when the administration came under the hospital. Exterior of the Church – Santa Maria della Spina
The church is one of the finest examples of Gothic architecture in Europe: it has a rectangular plan and is fully lined with marble. The exterior of the roof is characterized by cusps, tympani and tabernacles, with complex structures such as sculptural inlay, rose windows and statues of the fourteenth-century Pisan masters including Lupo di Francesco, Andrea Pisano with his sons Nino and Tommaso, and Giovanni Balduccio . The facade has two entrances with arches between the architrave which is the tabernacle with statues of the Madonna and Child with Two Angels attributed to Giovanni Pisano. Two niches are opened at the top of the front to hold the statue of Christ among four angels. The left side has numerous gables and decorated with thirteen statues of the Apostles and Christ from the laboratory Wolf. The small sculptures of saints and angels on the gables are the result of the laboratory work of Nino Pisano, while the niches in the pillar on the right shows a Madonna and Child by Giovanni di Balduccio. The back has three arches with simple windows, gables are decorated with symbols of the Evangelists, punctuated by niches with statues of St. Peter, Paul and John the Baptist. The high spiral culminates with a Madonna and Child by Nino Pisano. Inside the Church – Santa Maria della Spina
Compared with the rich exterior, the interior appears quite simple. It consists of a single room with a ceiling decorated during the reconstruction of the nineteenth century. At the center of the sanctuary is one of the masterpieces of Gothic sculpture, the Madonna of the Rose of Andrea and Nino Pisano, on the north wall is the shrine of Stagio Stagi (1534) in which was the relic of the Crown of Thorns. Another statue of Pisa, the Madonna del Latte, there was a time in this church, but was later transferred to the Museo Nazionale di San Matteo.