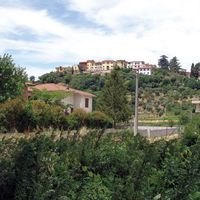 Important outpost for its medieval hilltop location, Santa Maria a Monte has long been disputed between Florence, Lucca and Pisa. The center has a unique urban structure: the houses and buildings all overlook the road that follows a spiral path. Walking through the streets of the defense system found traces medieval arches, tower-houses, the clock tower, the palace of the Podesta, the Collegiate Church, which preserves valuable works of art.
Santa Maria a Monte was born Vincenzo Galilei, composer and father of Galileo. Casa Carducci is still here, where the poet spent his youth.

The traditions of the country are renewed in the festivities in honor of the patroness, the Blessed Giuntini, culminating on Easter Monday with the Procession of the basket, when the village girls carrying baskets of flowers on the head.

Typical product of Santa Maria a Monte is a potato "Tosca", a variety of potato yellow flesh, good fried food, which are dedicated to a festival in August and a gastronomic event (the square Taste) in June.

The territory stretches from the hillside of Cerbaie and marshes of the Arno to Bientina. Not far from the capital is the ‘Observatory on a table with one of the most important in Tuscany, which runs courses in astronomy and theme nights for children and adults.

Santa Maria a Monte is part of the Leather District, an industrial district of Tuscany, which includes the municipalities of Santa Croce, Castelfranco di Sotto, Montopoli in Val d’Arno, San Miniato, near Pisa, and in the province of Fucecchio Florence.