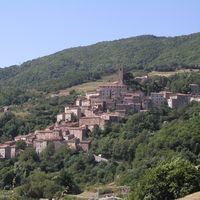 Castelnuovo Val di Cecina is a hill town easily recognizable by the characteristic shape of a cone of grapes. The municipality has a morphology varied, ranging from the Apennines to the Mediterranean and then get back hills with vineyards and olive groves.

The local economy is linked to the exploitation of forests and chestnut woods, grazing and mining activities. The last century marked the beginning of the exploitation of geothermal energy for electricity generation and district heating in urban areas.

Depart from Castelnuovo nature trails that reach places of historical interest, as the bridge over the river Pavone, or vantage points from which you can admire the Cornia Valley and the Gulf of Piombino. In the surrounding archaeological sites of the Etruscan and Roman period.

Near the fortified village of Montecastelli report is the Buca delle Fate, an underground Etruscan sixth century BC, and the remains of copper mines, inactive since 1941. Around the ancient village of Sasso Pisano geothermal phenomena are evident putizze of natural and fumaroles, which give the landscape a mysterious and hell, with steam coming out of the ground filling the air with an acrid smell of sulfur. After a long campaign of excavations has again visited the spa area of ​​Bagnone, a complex of the third century BC Hellenistic still spring from which water springs with temperatures between 40 and 70 degrees.

In the medieval village of Leccia is the chapel dedicated to Our Lady of Milk, which is celebrated on June 14, invoking her protection from hail.