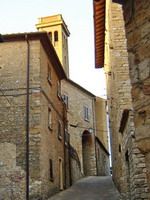 Casale Marittimo rises on a hill overlooking the valley of the river Cecina. The sea is just 12 km from the coast are clearly visible and the islands of the Tuscan Archipelago. Around the country, and between it and the sea, lies a country richly worked producing cereals, oil, honey and a fine wine, the DOC Montescudaio.

Casale Marittimo is inserted in the path of the Etruscan Coast Wine Route, which says the area has Etruscan and Roman ruins and medieval villages, wooded hills, cultivated fields and slopes, landscapes that combine the green of the vegetation with the blue the sea and offering natural foods and tasty.

Recent archaeological excavations in the area have unearthed the remains of an Etruscan village of the seventh century BC, in addition to the necropolis of Casa Nocera, a complex of tombs of the Etruscan warrior princes.

The medieval town was founded around the year 1000 and the signs of its events are visible in the center, remained almost intact, with its stone buildings, the castle (the remains of which are incorporated into the urban fabric) and the semi-circular ring structure subsequent boundary walls. Among the buildings of interest ricondano the Palace Fortress, the Church of St. Andrew, born on the ruins of the ancient church, and the eighteenth-century Santa Maria delle Grazie.

Full agenda, from spring to autumn, that of fairs and festivals. Among the various gastronomic events reported in July is the traditional Feast of Snails and in August that of the wild boar.