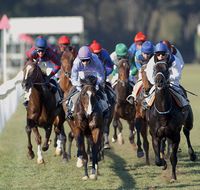 The San Rossore Migliarino Park stretches along the coastline of the provinces of Pisa and Lucca in the old lagoon area and paludosa.La area was filled in time by debris carried by the rivers Arno and Serchio and the Tyrrhenian Sea, but the territory is also the result of the work of man, which over the centuries regiment watercourses and reclaimed land. The first improvement works were carried out by Medici.La geographical location and climatic conditions provide an unusual variety of environments, with the presence of a large area of ​​coastal forest, dominated by pine forests (domestic and maritime) and deciduous trees, with large natural extensions to dunes and beaches (Tirrenia and Marina di Vecchiano) along with wetlands of international importance (Lake St. Flushing Massaciuccoli and blades).

The variety of natural environments (dunes, beaches, forests hygrophilous, stretches of Mediterranean vegetation, cultivated areas) and the presence of water (blades, ditches, canals, wetlands, lake, rivers, ponds) are the elements that characterize the determinants and Park St. Flushing. This variety in turn determines the richness and diversity of animal and bird species vegetali.Numerosissime, including migratory species, and nesting of step (purple heron, mallard, marsh harrier), as well as a strong presence of deer and wild boar and other smaller mammals such as foxes, hedgehogs, dormice, badgers and scoiattoli.La flora of the park includes some rarities such as the sundew (a small carnivorous plant), the Greek periploca (a rare vine), marsh orchid, the ‘pink hibiscus and ferns. The vegetation of dunes and coastal belt is characterized by very rustic pioneer plants but sometimes also very beautiful as the cornflower sands and sandy areas in the interior, the tufts of cane Ravenna.San Flushing, cavalloTra A race-related activities territory, in addition to the cultivation of food products and the collection of pine, near cattle and goat rearing, significant and long tradition that links the horse breeding activities in sports, with the presence of ‘Racecourse of San Rossore , also known as the Escola Prato, very popular in season corse.Tre are held within the territory of the park falls within the province of Pisa: The San Rossore, located at the center of the park, and the estate of Tombolo coltan to the south.