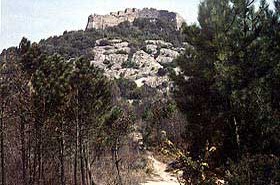 The Fortezzasorge in the town of Calci, on its namesake mountain, about 540 feet high; can be reached from Highway Pisa – Florence, exit Navacchio, then heading towards Caprona. Here you must leave your car and walk on a path that leads right up to the walls of the fortress.
It can also be reached by following the Firenze-Pisa, exit at Cascina, then continuing toward Vicopisano. From here take the road that starts from the warts of the village cemetery. Although much of dirt is passable by car to the foot of the rock on which stands the fortress (about 20 minutes walk).

Guided tours of the excavations in the month of July starting from Vicopisano, by appointment at the library of Vicopisano.
Description

The fortress is located on the top of the wart, in the east of the Pisan hills (537 meters above sea level) dominates and overlooks the plains of Pisa and the Arno river. Its strategic location has always made a valuable support for the safety of Pisa, in the centuries engaged in bloody struggles against the Florentines: the rock allowed a visual triangulation between Pisa and the castle of Vicopisano, in turn connected with the castle of Buti and all Lungomonte Pisa.
The documented history of settlements in the area starts from 780, when the territory was defended by a fortress in an ideal position to control the Arno River and its plains (at the time swamp) to the sea.
The fortress has always been an almost impregnable stronghold for all the armies and the forces involved in the conquest and control of the surrounding area: in 1288 the war between the Guelphs and Pisa Lucca Army, in 1328 following the German invasion of Ludwig of Bavaria; Fiorentina in 1363 during the invasion, in 1369 following the invasion of the troops of Charles IV of Bohemia and in 1375 than the English of John Hawkwood (Giovanni Acuto).
In 1402, after the conquest of Pisa by the Florentines, the fortress was destroyed to prevent the return to be a threat. The Florentine troops recaptured again warts after long and bloody clashes on June 18 of that year, was the final blow to hopes of independence of Pisa capitulated definitely in Florentine hands after six years. The present appearance of the fortress is the result of the strengthening work carried out after the many wars. The warts are considered a heterogeneous structure due to the different phases and different authors who oversaw the construction. A pentagonal, has two circular towers in front, the result of sixteenth-century restorations and two corner bastions, on the back. The main door, which preserves the structure trilithic, traces of hinges and latches, allowing entry to the fortress can be seen from the two levels of construction: the upper one, which has suffered the most damage and lower , completely underground.
The walls are one of the few examples of bastionatura performed with loose stones instead of bricks in brick characteristic time used for these interventions, the stones are used only for cutting corners and in small quantities. The oldest, dating from the eighth century, is built of stone verrucana: the primary structure is functionally characterized by in barracks and parade grounds, warehouses, a church and a cistern.
The Roccapresenta side access leading to the ramparts where rooms have been created from which he can shoot or the external monitor, several slits for guns are still visible along the entire perimeter. An important discovery was made in this rock: an inscription, now in the Museo Nazionale di San Matteo, which is almost certainly the first document in "vulgar" on which Italian law clearly MCII day June 12.