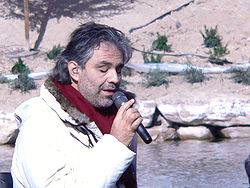 Andrea Bocelli (Lajatico, September 22, 1958) is an Italian singer. Interpreter of a vast repertoire and operatic pop pop, Sugar is linked to the record company and is one of the most famous Italian singers in the world is considered to have sold over 65 million copies of CDs.

Suffering from blindness by the age of 12 years because of an accident during a soccer game and a congenital glaucoma, and studied law, became one of the most popular international music stars and popular thanks to the success of many of his record albums as Romanza, Sogno, Skies of Tuscany, Andrea and Love.

In 1994 he won the Sanremo Festival in the category new proposals with the calm sea in the evening. The following year he finished in fourth place with the song’ll go with you. Although the two festivals was soon forgotten in Italy. His final return to the general public took place thanks to a spot where he felt the German’ll go with you. It was thanks to its success in Germany Bocelli’s songs were known in Europe as well as be shown in Italy, and on this wave of success became known internationally.

In a short time has become one of the most famous and popular Italian singers in the world thanks to a duet with Sarah Brightman Time To Say Goodbye English Version’ll go with you.

Among his best known songs sung to her, there is also live together with Georgia, played in other languages ​​with different singers.

In 2000, ends in the crosshairs of the financial police on suspicion of tax evasion.

In 2003 joined the tax amnesty and closing the dispute with the Italian tax authorities for 5.7 million.

On February 26, 2006 he performed in front of Worldvision almost 800 million viewers in the Closing Ceremony of the XX Olympic Winter Games Torino 2006.

Thursday, December 11, 2008 was the protagonist of a special episode of the television program What time ago.

On May 25, 2009 he performed a concert at the Colosseum in Rome led by Milly Carlucci and broadcast live on RAI. The proceeds, 350,000 euros were donated to the Ministry of Culture for the reconstruction of the Conservatory of L’Aquila damaged by the earthquake.

On July 7, 2009 she sang at the funeral of the victims of the tragedy at the railway station of Viareggio.