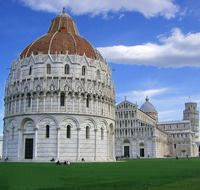 Pisa is much more than the famous Leaning Tower and deserves a longer stay while the irreplaceable to the beautiful Piazza dei Miracoli UNESCO World Heritage Site.
Antica Repubblica Marinara, Pisa is a city born and raised along the Arno. The inlets of the river make suggestive and never equal to the same view of the Arno river and the buildings that face on them, which can be seen from the five bridges crossing the Arno river or from boats. The charm of the Arno River in Pisa have wrote, among others, Byron, Shelley, Montesquieu, Leopardi, Carducci, D’Annunzio and Foscolo.

Pisa is the city of Galileo Galilei, which gives its name to its main international airport and which in 2009 was celebrated the fourth centenary of the first astronomical observations.

Pisa has an outlet to the sea and a coastline surrounded by the Regional Natural Park Migliarino San Rossore. In just a few miles of the coast, Marina di Pisa, Tirrenia and Calambrone offer visitors three different types of bathing offer.

The four districts of the city’s historic center revive their traditions in the Game of Bridge, a major historical event that takes place in June, during the festivities connected to the patron Saint Ranieri. At dusk on June 16, all night, the Lungarni off their lights and light up with candles placed on frames that follow the outlines of decks and windows of the buildings: it is the magical atmosphere of the Illuminations.

The districts of the historic center of Pisa maintain their identity from the medieval flavor, just dig into the streets and alleys that branch off from the axis North-South Course Italy – Borgo Stretto. Walking these streets you can discover corners and highly evocative squares, churches of ancient beauty, restaurants based on traditional Tuscan cuisine.

Pisa is a city of research and university studies, with the presence of institutions of excellence nationally and internationally: the Scuola Normale Superiore, Piazza dei Cavalieri in the enchanting, and the School of Advanced Studies and Specialization Sant’Anna, the beautiful Piazza dei Martiri of Liberty, the National Research Council (CNR).

Pisa hospital center of excellence, it is yachting, biomedical and pharmaceutical industry is. In the coming years will be re-port, with the start of work on the marina. In recent years, the city is the center of major redevelopment works, such as moving the hospital toward the east, following the expected recovery of the hospital area adjacent to the Piazza dei Miracoli, the walkway on the walls, the Museum of Roman Ships.

Stop in Pisa to enjoy a city allows you to "human scale", to live with "slow", populated by many young people who love each other, since the summer, find themselves on the "shoulders" of the Arno.