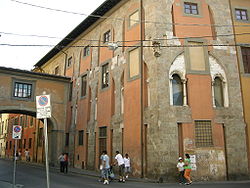 Palace of the Widows – Pisa

The Palace is a palace of the Widows of Pisa, situated between Santa Maria and Via Trento.

It was formerly present here the domus of Bocci, strategically built near the New Bridge. The old building had been built between the twelfth and fourteenth century with an elongated shape with a rectangular base, with a very altered by the sixteenth-century makeover, but still legible on the outer walls, the highlighted elements of the primitive and medieval openings partly destroyed to make way for new rectangular windows. Of particular interest is the prospect of Via Trento, where you can see a four of valuable marble, cut to the center for insertion of a rectangular opening.

Via Santa Maria can be seen six bays on the ground floor had a porch, while the upper floors were going to form the backbone of the building with big arches sacrico weight under the roof.

The building, heavily remodeled in the sixteenth century, was used by "widows" of the Medici family. Two steps of arc through the upper corridors supported by the way, linking the palace before the Torre De Canton, then, using the same tower, with the Church of St. Nicholas of the building allowing the guests to go to church without getting off the street.