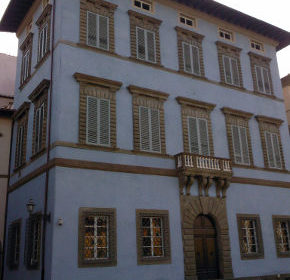 Giuli Rosselmini Gualandi Palace, is located in Pisa Lungarno Gambacorti, near the Lombard church of Santa Cristina. It recently became known as the Palace because of the blue color dell’intonacatura and restored the name of the museum center built in some of the rooms inside.

The first traces date from the early Middle Ages (eighth century), in the form of rural settlement near the said church, near the one bridge, called the Stone Bridge that allowed access to the city from the territories south of the Arno River, along the ancient Via Emilia Scauri (the present Via San Martino and Toselli). During the restoration work by the Fondazione Cassa di Risparmio di Pisa, which he bought by Count Giulio, hence the name, was brought to light part of the ancient pavement of the street, in places Sestini brick herringbone , with its pavement, dating back to the twelfth century and a massive wall structure, which is part of a defensive tower, with its characteristic pointed arch opening, made of stone, dating from around verrucana the last years of the eleventh century.

He joined the municipality of Pisa, after 1155, when they begin the construction of the oldest preserved medieval city walls in Italy, under the consulate of Coconut Griffi, the whole house is enhanced by and tower-houses, as in the rest of the city, often called the city a thousand towers, sign of a growing wealth and power of the Maritime Republic.

On 14 November 1356 the Doge John Lamb, owner of several properties in the area, obtained by the Elders of the City permission to some extend in this area. This raises the first core of the building, or domus, a structure consisting of large stone pillars verrucana, two or more modules together to form pointed arches, filled with brick and decorated with a single and mullioned openings in the pattern of neighboring buildings Gambacorti and pupils.

During the first Florentine domination between 1406 and 1494 the building underwent significant changes, given the decline of the family Dell’Angello. After moving to the City at the end of the fourteenth century, became the property of the Republic of Florence, which uses it as the headquarters for the five supervisors security guards occupied the city, until returning to the property of Giovan Bernardino Lamb.

Pisa in 1494, with the help of Charles VIII, King of France, regaining freedom from Florence and the Palazzo Giuli happens right inside one of the most important events for the people of Pisa. The king enters the November 8, 1494 in Pisa with an army of three thousand horsemen, and is housed in the Palazzo D’Appian, before whom the Pisani demanded freedom from the enemy. Guarantee of freedom to ask who returned in June of 1495, when King was once again in the city, at a grand ball which was held right inside the Palace Giuli, during which all the most beautiful women of the nobility Pisa presented themselves before the king, begging that kept the promise made firm the previous year, including the well-remembered Camilla Lante. Unfortunately, despite promises, Pisa loses again in 1509 in favor of the liberty of Florence, which apply in the time a policy changes designed to forever change the face of the city and to remove any reference to its glorious past Republican.

"" … And said June 21 he went to the King of Franza bedere dancing to the house of Messer Gianbernardino Dell’Agnello Santa Cristina on the balcony, and there was no many girls and women of Pissa to that dance, and sitting in the King made ​​two women girls, the most beautiful at the ball, he was ordained in many girls and women dancing gittorno genocchioni forward to the King, demanded Pissa grace that he will never return below Florentines were provided with many good words from the King said. " "(John Portoveneri Memorial, since 1494 until 1502)

Towards the end of the sixteenth century the complex was transformed by the families Sancasciano and text. It was Emilio Del Testa, who in 1593 radically transformed the building from domus medieval sumptuous palace in the late Renaissance, by applying a sober decoration of the facade, simply embellished with stone inserts, in the second half of the eighteenth century was subject to further changes by Agostini family, who inherited the venerable in 1745 and sold it to Dr. leased Designed Cesare, director of Greek Russian Imperial College, on behalf of the Empress Catherine II in 1773.

It was in honor of the great Russian artistic season, which saw the great Italian masters at the court of the Czar to design and decorate impressive palaces in St. Petersburg, the palace was made to paint with the characteristic blue color, or color of air, applied to palaces Petersburg to soften the forms. At that time the building was driven by a very intense social and cultural life. In 1774 it was attended by Princess Yelizaveta Alekseyevna Tarakanov (1753-1777), who claimed to be the daughter of Alexei and Empress Elizabeth I Razumovskij: suspected of plotting against the Empress Catherine II, there was kidnapped in February 1775 to be traced back to his homeland by Admiral Alexei Orlov, commander of the Russian Imperial Fleet base in Livorno for the war against the Turkish Empire. In 1781 Ekaterina Daskova lived there (1744-1810), director of the Russian Academy of Sciences, which has left a description of the city, the Game of the Bridge and the palace in his memoirs.

The current color is chosen during the restoration of the facade when it was discovered a fragment of painting the late eighteenth century, and applied following the technique of fresco painting.

In 1788 the Blue Palace is sold to the family by Agostini Del Testa to buy the White Palace Tilli brothers (nephews and heirs of the botanist Michelangelo) and add it to the Red Palace (now known as the Palace dell’Ussero), and thereafter will be purchased by the family arms -Cambini, which will carry important new works of which the magnificent remains of the square room door of the Grotesque, surmounted by the coat of arms, masterfully executed by Antonio Niccolini, a clear sign of cultural and artistic fervor that Pisa was living in the nineteenth century. The accounts are Archinto Milanese owners of the building for much of the nineteenth century, until in 1861 Ferdinand, Count Domenico di Giuli bought it for the figure of 50,000 pounds, which gives rise to a restoration campaign that led to the palace to its present size and, by integrating a portion of the alley, between the palace and the adjoining Palazzo Casarosa (also integrated as a whole), and building from scratch a wing of the building to make the symmetrical façade century.

The building is undergoing a period of splendor, each room is decorated and newly renovated, thanks to the intervention of the artist Nicola Pisano Torricini, which in 1884 he decorated the magnificent library of Count Giulio, on the ground floor, the room has now become the altarpieces, which displays the Polyptych Agnano (Pisa) Cecco di Pietro last decade of the fourteenth century and its copy, made in 1930 by the Italian most famous forger of the twentieth century, Federico Joni Icilio. Nicholas Torricini is the coordinator of a massive restoration campaign, which ends in 1903 with the opening of the Red Hall, or dining rooms, at a dance held in Pisa refined by Count Giulio.

The palace has been inhabited by Count Giulio until 2001 and, despite having become an ambush for the Allies during the Second World War, has suffered extensive damage. The Fondazione Cassa di Risparmio di Pisa, which has moved its headquarters, bought it to make it a center of culture and art, called BLUE – Center for Art and Culture.

Inside you can visit the ground floor and the main floor, that explains the major masterpieces of the Savings Bank Foundation Collection, which includes artists such as Cecco di Pietro, Taddeo di Bartolo, Benozzo Gozzoli, Vincenzo Foppa, Aurelio Lomi, the Cigoli, Orazio Gentileschi, Artemisia Gentileschi, Giovanni Battista Tempesti, Jean Baptiste Desmarais, Joseph Bezzuoli, Luigi Gioli and a rich collection of twentieth-century art, most notably Umberto Vittorini, Mino Rosi, Ferruccio Pizzanelli and Fortunato Belloni, member of the Second Futurism. Collection of the Cassa di Risparmio di Pisa Simoneschi are also part of the Collection, which includes a vast repertoire of Antiquities and a large coin collection and a collection of woodcuts, etchings and lithographs by the great artist of Pisa Giuseppe Viviani. The rooms are furnished in eighteenth-century style, with antique furniture and furnishings.

Other rooms of the building are reserved for temporary exhibitions which occur with some frequency.